The "Yoga of the Mind", a mantra is a syllable, word or phrase in one of the sacred languages (like Sanskrit & Ghurmeki) and sometimes in English, which elevates or modifies consciousness through its meaning, the sound itself, rhythm, tone, and even the reflexology of the tongue on the palate.

The three languages of consciousness are:

There are two things you can do to make the use of a mantra more powerful, regardless of how you recite. One is to see the mantra, as if it is being written as you say it, and the other is to actively listen to it as you say it, perhaps, in this case, when using the first two languages. 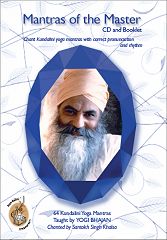 Mantras of the Master as enunciated by Santokh Singh Khalsa is highly recommended by Guru Rattana as a very useful and effective adjunct to our course.

Quickly learn the exact pronunciation and rhythm of 64 of the most popular Kundalini Yoga mantras.

When properly utilized, the power of mantra, the “Yoga of the Mind”, is amazing. Yogi Bhajan’s teachings centered on the conscious application of ancient mantras and positive modern affirmations.

Some of the most frequently used, and hence important, mantras are given below:

This mantra tunes into the frequency of the Divine Mother, and to primal protective, generating energy. Chanting it eliminates fears and fulfils desires. Adi Shakti means the "Primal Power," Sarab Shakti means "All Power", and Prithum Bhagawati means "which creates through God."

AP SAHAEE HOA SACHE DA SACHE DHOA, HAR, HAR, HAR. means "The Lord Himself has become our protector, the Truest of True has taken care of us, God, God, God", or "The Lord Himself is my refuge, true is the support of the True Lord". Chanted for prosperity.

EK ONG KAR, SAT NAM, KARTA PURKH, NIRBHAO, NIRVAIR,
AKAL MOORT, AJUNI, SAI BHANG, GUR PRASAD, JAP,
AD SUCH, JUGAD SUCH, HABHE SUCH, NANAK HOSI BHEE SUCH
is the root of all mantras. It means, "The creator of all is One. Truth is His Name. He does everything, fearless, without anger, undying, unborn, self-realized, realized thru Guru's Grace, Meditate: He was true in the beginning, true thru all the ages, true even now. Nanak shall ever be true."

EK ONG KAR, SAT NAM, SIRI WHA (HE) GURU is very powerful for awakening the Kundalini and suspending the mind in bliss. Ek means "One, the essence of all", Ong is the primal vibration from which all creativity flows, Kar is "creation", Sat "truth", Nam "name" Siri "great", Wha "ecstasy," and Guru is "wisdom". Taken together it means, "There is one Creator whose name is Truth. Great is the ecstasy of that Supreme Wisdom"!

GOBINDE, MUKUNDE, UDARE, APARE, HARING, KARING, NIRNAME, AKAME means "sustainer, liberator, enlightener, infinite, destroyer, creator, nameless, desireless". It brings stability to the hemispheres of the brain and works on the Heart Center to develop compassion, patience and tolerance, uniting one with the Infinite.

HAR means Creative Infinity, a name of God.
HARA is another form.
HARI is the active form of Creation.

ONG means Creator - the Primal Vibration from which all creativity flows.

ONG NAMO, GURU DEV NAMO should always precede Kundalini Yoga practice, tuning one in to the higher self. Ong is "Infinite Creative energy in manifestation and activity". ("Om" or Aum is God absolute and unmanifested), Namo is "reverent greetings' implying humility, Guru means "teacher or wisdom", Dev means "Divine or of God" and Namo reaffirms humility and reverence. In all it means, "I call upon Divine Wisdom".

ONG SO HUNG is "Creator, I am Thou!", a heart-opening and empowering mantra.

RA MA DA SA, SA SAY SO HUNG is chanted for healing. Ra is the sun, Ma is the Moon, Da is the earth, and Sa is Infinity. Say is the totality of Infinity, and So Hung is "I am Thou". "Ra Ma Da Sa" is the Earth Mantra. and "Sa Say So Hung" is the Ether Mantra.

SA TA NA MA expresses the five primal sounds of the universe. "S" is Infinity, "T" is life, "N" means death and "M" is rebirth. (The 5th sound is "A".) This is one of the most frequently used mantras in Kundalini Yoga.

SAT NAM is the most widely used mantra in the practice of Kundalini Yoga. Sat means the Truth; Nam means to call upon, name or identify with. Sat Nam means Truth is my identity and I call upon the eternal Truth that resides in all of us. Chanting this mantra awakens the Soul, and more simply means "really". It is pronounced to rhyme with "But Mom!"

SAT NARAYAN, WHA HE GURU, HARI NARAYAN, SAT NAM.
In this ancient mantra, Narayan is the aspect of Infinity that relates to water, and Hari Narayan is Creative sustenance, which makes the one who chants it intuitively clear or healing. Sat Narayan is True Sustainer, Wahe Guru, indescribable Wisdom and Sat Nam, True Identity.

WAHE GURU is the mantra of ecstasy. It is not translatable but chanting it elevates the spirit.